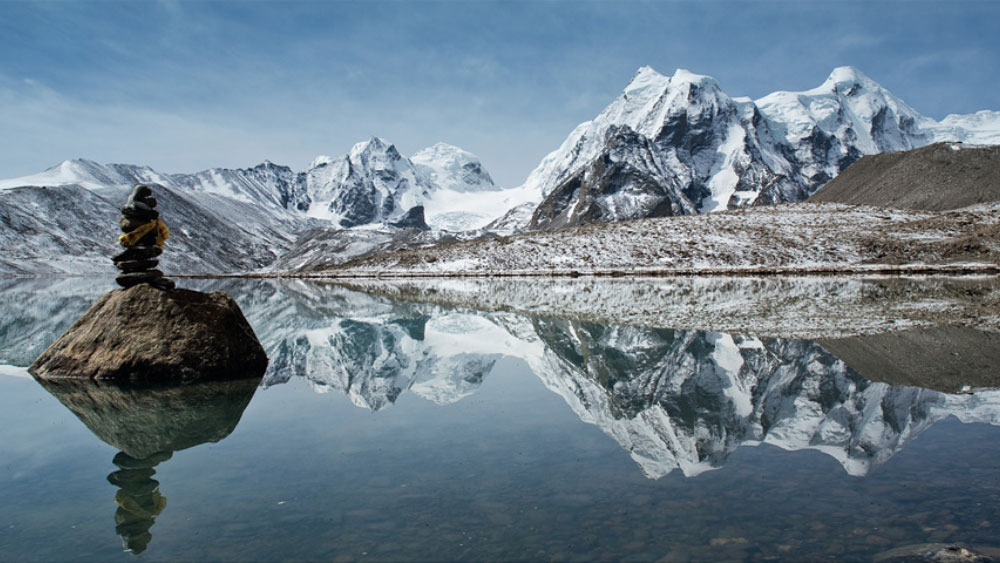 The spectacular Himalaya is under assault from the economic demands of a growing population, infrastructure development, regional conflicts, land degradation and climate change, with severe consequences for humanity.

People of  Japan , always had a fascination  with the Himalaya – the abode of gods, the land of snow, and the last Shangri La on earth. Many plants are common to the mountains of Japan and the Himalaya., and Buddhism is prevalent in both the regions. Thus it is not surprising that scholars from Japan have written extensively about the Himalaya.

This shared concern for the Himalaya and its richness of life, cultures, languages and ethnicities, will be critical for joint action between Japan and the peoples of Himalayan nation states to meet the challenges of  ongoing global environmental change in the world’s most important range of mountains.

Perhaps no other part of the world is as rich in biodiversity as the Greater Himalaya. The Himalayan ranges of India alone constitute one of 34 global biodiversity hotspots – regions of the world extraordinarily rich in the number of species found nowhere else on earth. The mountains are home to two thirds of all species found in India and the Greater Himalayas, extending to the Tibetan Plateau and into southeastern China, harbor perhaps 10 percent of our planet’s total biodiversity. If the Himalayas as a whole are outstandingly rich in plant and animal life, the Eastern Himalayas are spectacularly so. The tiny state of Sikkim is just 7,096 square kilometers, but because its altitude ranges from 280 meters to 8,585 meters, the state contains examples of virtually every type of ecosystem encountered in the entire Himalayas – from lowland semi-evergreen forests to alpine meadows. It occupies less than 0.0025 per cent of India’s land area, yet hosts 20 percent of its plant and animal species.

The sheer abundance of the Eastern Himalaya’s ecosystems defies description. It is the teeming home to nine percent of the world’s mammals, including such iconic species as the Royal Bengal tiger, the greater one-horned rhinoceros, Asian elephant, red panda, snow leopard and clouded leopard – the smallest of the big cats. Its seemingly boundless and beautiful birdlife embraces the Bengal florican, blood pheasant, black-necked crane – worshipped as a reincarnation of an early Dalai Lama – the green magpie, fire-tailed sunbird and ten species of extravagantly beaked hornbills.

The story is repeated with its reptile, aquatic and amphibian species. The region’s thousands of plant species include breathtaking varieties of exotic orchids, rhododendrons, primroses and wild ginger. It features countless floral celebrities – cobra lilies, the blue poppy, the ethereal white bat flower and many more. The mountains are also a vast source of medicinal plants such as the ghostly looking Sikkim rhubarb, which when in flower punctuates hillsides like a spectral sentinel, almost two meters high and prized for its rarity and medicinal properties.

Perhaps the most precious – literally – is the legendary caterpillar fungus. This complex of a fungus and a moth caterpillar has long been used in China for a wide variety of treatments, including cancer. But its reputation as an aphrodisiac, together with the huge increase in the buying power of Chinese and other Asian communities, has propelled it to a new status, as the world’s most prized fungus, worth twice its weight in gold. The hunt for it has led to violence among rival mountain communities who fight over a potentially rich, but often bitter harvest. This is just the story so far. New species are still regularly discovered in the eastern Himalaya. A recent World Wildlife Fund report records 353 new species discovered in the region between 1998 and 2008, including 61 invertebrates, among them Nepal’s first scorpion, 16 reptiles, 14 frogs, 14 fishes, two birds and two mammals. Many remote ecosystems have yet to be fully surveyed. The state of Arunachal Pradesh, regarded as being among the richest places on earth, has been barely explored. Similar regions exist on the borders of Myanmar. The Arunachal macaque was identified only a few years ago, the world’s smallest deer, the leaf muntjac （Muntiacus putaoensis）, was first recorded in northern Myanmar in 1999.

In addition to being the Third Pole, the Himalayas are also Asia’s water tower: the mountains serve as the watershed of the continent’s eight largest rivers. More than 1.3 billion people (a fifth of the world’s population) living in the basins of these rivers rely on their waters for sustenance. These ecosystems provide food, fiber, fodder, fuel wood, medicinal plants, wild pollinators, climate and water regulation and carbon sequestration. Biodiversity also has irreplaceable religious, spiritual and aesthetic value. Agriculture in the Himalayas is intertwined with, and relies on, surrounding biodiversity. Yet even before all its riches have been uncovered, this great natural life-support system is under serious threat.

The tremendous biodiversity of the Himalayas is being lost, owing to the economic demands of population growth and the effects of climate change. Natural ecosystems are being converted for other uses, such as by deforestation or putting land to the plough. Biodiversity is gradually being degraded by extraction of species for trade, or disruption of ecological processes owing to habitat fragmentation, pollution, spread of alien invasive species, and diseases – all induced by humans.

Thus the one-horned rhinoceros, hunted for it’s purported medicinal properties, is on the verge of extinction in much of its range. The Bengal tiger, sought for its skin, is threatened. As its forest habitats recede, the red panda – the size of a domestic cat and a distant cousin of the giant panda – is now regarded as a living fossil, classified as vulnerable. The newly identified Arunachal macaque is already listed as endangered, along with the golden langur, one of the world’s rarest colobine monkeys, it discovered only in 1955. The danger list is endless.

Fast-growing populations with increasing levels of consumption can overload natural ecosystems. Economic growth to meet the increasing demands inflates energy needs. China and India envisage building about 400 dams on either side of the massive Himalayan watershed – four times the current number. These displace the biodiversity, as well as people, erode rare river life and run risks associated with earthquakes in a seismic hotspot. Then there are the side effects of unregulated tourism, antiquated policies and centralized governance of natural resources.

The Himalayas are melting, glaciers are receding. Climate change is affecting the Himalayas more rapidly than almost anywhere, perhaps with the exception of the North and South Poles.

Over the last 30 years, average temperatures in the Himalayan appear to have risen by 1.5°C, far higher than the Intergovernmental Panel on Climate Change predicted. Rainfall patterns too, have changed, with less rain in non-monsoon periods and bursts of excessive downpour during the monsoon.

Many small Himalayan glaciers have disappeared. Larger ones are retreating at an alarming 10-60 meters per year. Glacial melt waters often feed lakes at the terminal ends, bounded by glacial ice or moraines, which eventually burst under the inflow. In the last 25 years, there have been more than 20 glacial lake outburst floods (GLOFs) in Nepal and five in Bhutan. The Dig Tsho GLOF of Nepal in 1985 washed away the Namche Hydropower plant. In 1994, the Lugge Tsho flood in Bhutan killed several people and extensively damaged a town 86 km downstream.

Climate change is affecting wild species. Many plants flower earlier, while others are shifting their ranges and moving to higher locations. High altitude species already in mountain-top habitats, with nowhere to go, face extinction. Increased aridity outside the monsoon seasons is likely to reduce agricultural yields.

Cropping patterns are changing. Some changes appear to have positive effects, such as longer growing seasons and experimentation with new crops even at high altitudes. However, growers also encounter weeds and pests previously unknown. The movement of mosquitoes to higher altitudes is another ominous portent. Disease carrying agents for both people and other species, including agricultural crops and domestic animals, are likely to spread. Despite these widespread changes in climate, the impacts on biodiversity, hydrology and on people’s health and livelihoods all remain poorly documented. Government and other agencies are inadequately prepared to meet the inevitable challenges.

Environmental change presents humanity with a set of challenges which few – if any – of us, are yet truly prepared to confront, intellectually or psychologically. The scale and complexity of forward thinking and commitment required to mitigate this problem is unprecedented. It will require substantial financial, technical and human resources to prepare government and civil society to cope with the change sweeping the Himalayas.

Text and photographs are extracted from his  book with Sandesh Kadur : Himalaya – Mountains of Life (www.Himalayabook.com).

Dr. Kamal Bawa is President of a world-class think and do tank, the Ashoka Trust for Research in Ecology and the Environment (ATREE) in Bangalore, India and Distinguished Professor at the University of Massachusetts, Boston, USA. Dr. Bawa has generated significant win-win solutions that serve as models for conservation across the globe through tackling the compatibility of both the economy and the conservation of biodiversity. Dr. Bawa traverses the North-South divide, making contributions to India, Costa Rica, United States and the world. His pioneering work on the sustainability of non-timber forest product extraction demonstrated that conservation and human well-being could be simultaneously achieved.

Dr. Bawa has made distinguished intellectual contributions to biodiversity science through ground-breaking research on conservation. He discovered new modes of reproduction in tropical forest trees that changed prevailing notions about their ecology and evolution. Also, he developed a new class of genetic markers for tropical forest trees, and showed that forest fragmentation, widespread in the tropics, depletes biodiversity. He developed new paradigms and tools for conservation, explored synergies between conservation and social goals such as poverty reduction, and identified conservation priorities in biodiversity hotspots. He has taught 2000 students and mentored 30 doctoral and postdoctoral scholars.

In 1996 Dr. Bawa founded ATREE in India. ATREE’s work has been unique for its interdisciplinary approaches, and has shaped the policy agenda including work leading to nomination of the Western Ghats as a UNESCO World Heritage Site, a ban on mining in a national park, and implementation of the Forest Rights Act. With a core research staff of 80, 27 with doctoral degrees, ATREE is operating a new interdisciplinary doctoral program in biodiversity science in order to build the manpower India badly needs to successfully conserve in the 21st century. ATREE is a model for a research, education and policy institution not just in India or the developing world, but across the world. A University of Pennsylvania group has rated ATREE as the #1 environmental think tank in Asia and 19th in the world (2011 and 2012).

Dr. Bawa has shaped the direction of conservation science, action and policy through serving as President of the Association for Tropical Biology and Conservation, as founder and editor-in-chief of an international, interdisciplinary journal, Conservation and Society and as a member of the National Geographic Society’s Committee for Research and Exploration. Furthermore, Dr. Bawa led efforts to establish the India Biodiversity Portal, and has contributed to raising awareness of biodiversity.