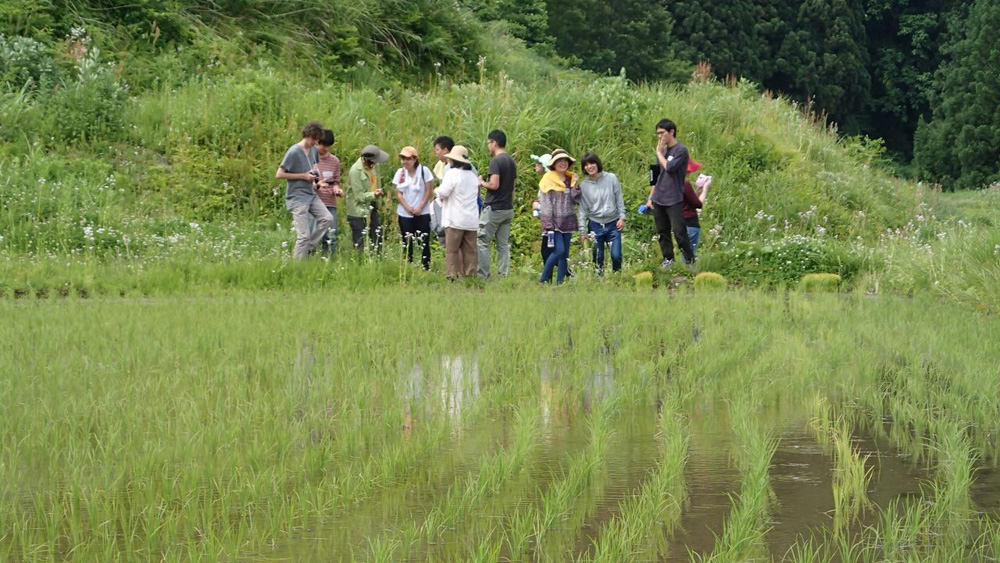 In June 2016, twenty people in their 10s to 70s entered the rice paddies with bare feet.  We were in Tochikubo – a village situated in the mountains of Minami-Uonuma City, Niigata Prefecture, Japan.  We were bending down, stirring the mud with our arms and pulling out the weeds.  A person directly arrived from Singapore, and university students from the US and China were also participating.  Getting rid of weeds in rice paddies was a first experience for most of us – except some local people.

Rice terraces indicate small-scale rice paddies as they are developed by cultivating lands of mountain slopes. In other words, so-called “cost-effective” rice-farming using large equipment is not possible on rice terraces. In the first place, agriculture is no longer viable as a livelihood – young people in the villages go out to cities and look for jobs. The number of households obliged to discontinue agriculture is increasing.

Due to a policy changeover, efforts of community farming have been made in Tochikubo since about ten years ago. Rice farming has been conducted through forming an organization mainly consisting of retired people in the village. They are producing rice instead of elderly people by borrowing land. These efforts have been undertaken in order to conserve the local environment where the inhabitants live, to pay respect to precious rice paddies where their ancestors worked, and to sustain possibilities for future generations.

The people in Tochikubo considered different rice-farming methods from those conducted in the lowlands – and decided to grow rice organically without using or greatly reducing agricultural chemicals based on their belief that there must be people who find value in safe rice even if it is a little bit expensive.

The community farming organization in Tochikubo provides several year-round programs in agricultural chemical-free rice paddies in cooperation with a NGO. The abovementioned people were joining in the “weed-pulling” term among the programs. Six university students from my class also participated in this program as part of learning to consider the relationship between humans and nature.

This two-day and one-night program included a classroom lecture by farmers, spectacular meals using local ingredients, exchange parties with villagers, and so on. We could learn a lot through walking around the village: for example, habitats of Japanese serows, animal damage, steep slanting roofs unique to snowy regions, and a primary school where only about 10 students are studying. We could actually see and know the ecological or social issues including the influences on rice paddies due to a great reduction in the snowfall this year.

Generally, most of the university lectures are given in a classroom. My lectures on “sustainability” are also provided in the classroom.

The concept of biodiversity is an essential theme for sustainability. However, it is often the case that the students “vaguely understand with their head” but “don’t have an aha moment” even through the diverse explanation makes use of various words and photographs in the classroom. This might be due to my way of explanation – but their lack of experience in the interface between nature and livelihood would be another reason for their insufficient understanding. When I give them assignments to investigate real cases, most of their reports are completed with temporal words copied from sources.

On the other hand, learning from experience leads to the physical acquisition of what they know in words, and forms a sense.  By doing this, changes are often made not only in their understanding but also in their values and actions.  The comments in the questionnaire made by the program participants at the end of the program are as follows.

“Rice paddies are filled with life.  I could sense again that rice paddies function as part of natural ecosystems not as a food factory for humans.”
“I was able to more deeply understand how food relates to our health.”
“Rice paddies are not only for rice to grow but also provide habitats for leeches and frogs.”
“Learnt the importance of sustainability, and how nature conditions are able to affect agriculture despite all the technological advancements!”

These perceptions would be a trigger to concretely think about biodiversity and sustainability.  If the lectures on biodiversity are given based on these experiences, students would understand more and have an aha moment: “these are the ecosystem services that we learnt in the classroom!”  Then, their understanding will be developed to further scientific, logic and physical understandings about people’s lives and societies sustained by biodiversity.

Depending on the respective abilities, any experiences can be linked to learning. When they are situated in the educational design, further effectiveness can be expected. For example, opinion exchanges among the participants can provide precious opportunities to deepen their understanding and even acquire new perceptions. The formally provided opportunity can allow deeper discussions leading to changes of conventional ideas.

For example, a student who completed the “weed-pulling” program said, “What I noticed here could not be applied to my life in Tokyo as the environment is very different from here.” “I have no confidence in continuously thinking about the relationship between nature and humans as there is no nature in Tokyo.”

Based on her comments, opinion exchanges in the group took place.  One pointed out that it might be a misleading assumption that there is no nature in Tokyo.  Also, consideration about the concrete relationship between the visit site and Kantō Region is made regarding the effect on the drinking water in Kantō due to the infrequent snowfalls in Tochikubo this winter.  Another raised an issue that we can apply something to our daily lives as consumers based on the experience of partly being involved in making organic rice.

In the classroom just after returning from this program, the abovementioned student said “(I firstly thought that there is no nature in Tokyo but) I was able to find nature in trees planted along the road,” when she was asked about the change in her consciousness and activities.  Other students said, “When I buy a rice ball at a convenience store, I came to think about where the ingredients come from,” or “I came to think about whether the ingredients are made organically.”
Then again, these opinions can be incorporated into each student’s thinking.

I conducted an investigation “searching for the educational feasibility of rural villages” for 67 participants and 10 villagers involved in 4 programs implemented in Tochikubo village several years ago. The questionnaire included an item about “the things that I am going to do or change based on my participation in the program.”

80% of the people answered this question, and most comments fall in the categories of “environmentally-considered lifestyle” and “food.” Examples were “growing vegetables by myself,” “avoid using synthetic detergents,” buying vegetables and rice in consideration of farmers,” “selecting agricultural chemical-free vegetables,” “being aware of greenery and living things,” and so on.

One answered that these activities are “the implementation of inconvenient but enjoyable lifestyles.”
Others mentioned the regions or local areas: “I am going to frequently go back to my parent’s home. I would like to take care of our fields.” “I would like to learn about the wisdom of ancestors and nature such as topography, ecosystems and plant growth.”
“What I am going to do” and what is actually done are different, but according to these comments, it is apparent that these experiences in the village encouraged them to be conscious about sustainability even though the program is just two days and one night. What is important in learning at the sites is not to provide understanding in words but to nurture a sense for increasing possibilities through changing or acting in lifestyles.

Now, the global natural environment is in a severe condition. Various data show that it will be impossible for us living in industrialized countries to continue the same lifestyle in the future. Then, what types of ideas should we have and how should we establish a new society?

We believe that we can buy food anytime at a shop and drink water just by opening a faucet. But we can therefore notice unexpected things through living close to nature. We would be able to realize what is intrinsically important in order to sustain a society where we can live.

For us, it is crucial to nurture the environment and people that can not only understand biodiversity in words, but also sustain it, increase its value and act for it in their daily lives toward establishing a new society.

Dr. Takako Takano serves as Professor of the Center for International Education, Waseda University and Chairperson of ECOPLUS, a registered NPO in Japan.  She earned her Ph.D. degree (School of Education) at the University of Edinburgh, and her master degrees at the University of Cambridge (M. Phil., Environment and Development) and Waseda University (Politics).  Her major interests include education in the field, the environment and sustainability and social anthropology.  Based on the theme of “humans, nature and different cultures,” she has conducted the planning and operating environmental and field educational projects on a global scale since the beginning of the 1990s.  She focuses on learning from experiences and advocates “place-based education” as well as creating a space for learning.  In 2002, she was selected as a prize winner of the Omega Award along with Sadako Ogata and Sayuri Yoshinaga.  She appeared in an environmental documentary film, “The Gaia Symphony.”