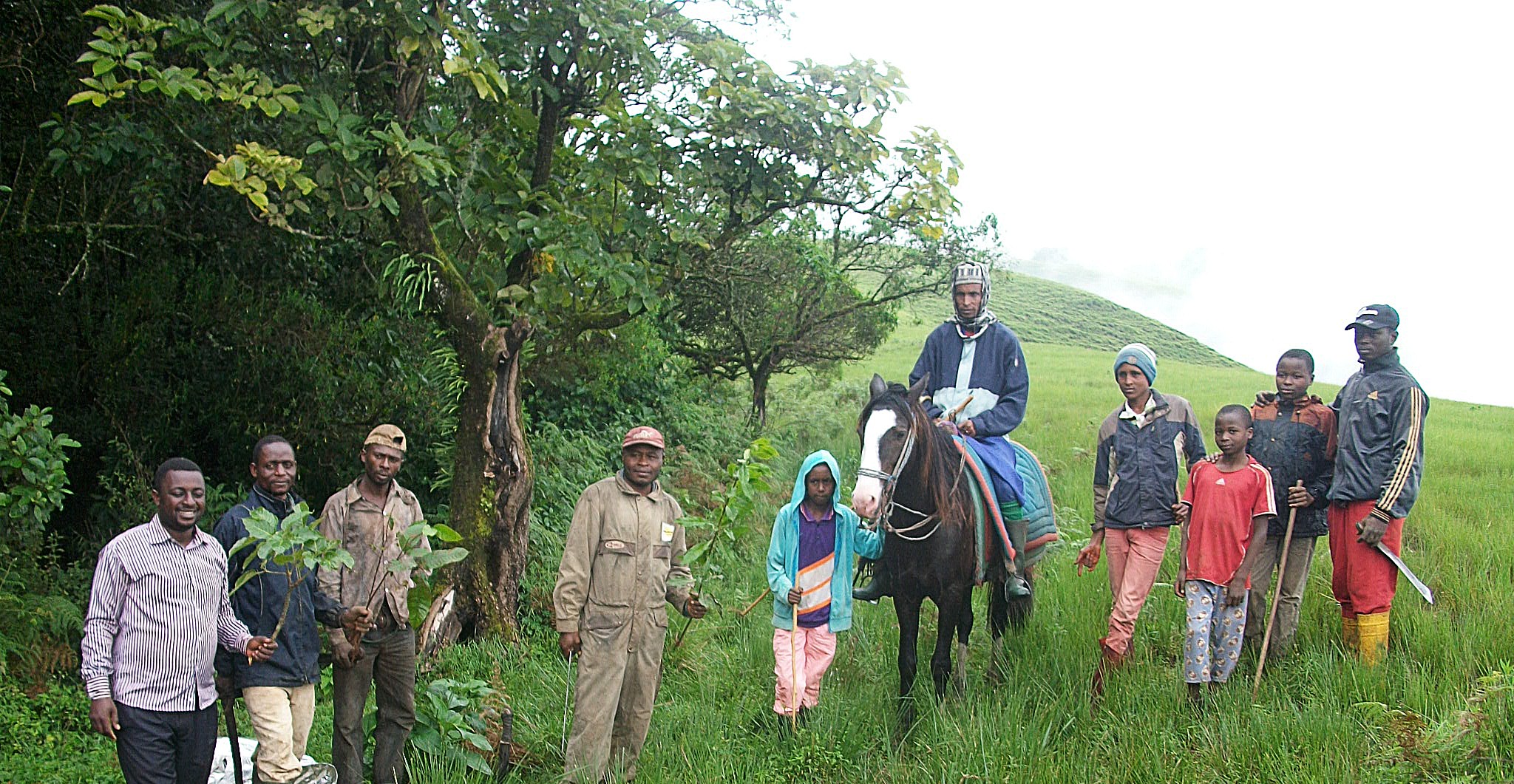 Kilum-Ijim forest is in North West Region –Cameroon. It is part of montane forest in Bamenda Highland Forest and produces Oku White Honey- certified as Geographic Indication Product. It covers 20.000 hectares with a peak at 3011m and a large Crater lake called Lake Oku.  Kilum Mountain is the second-highest mountain in Cameroon after Mount Cameroon. It has a rich ecosystem with non-timber forest products like Oku White honey, mushrooms, medicinal plants, spices, etc. Oku White Honey produced by trees like Nuxia congesta, Prunus africana, Schefflera abyssinica and Schefflera manni. Only 2 of these products are certified in Cameroon with the other being the Penja White pepper.

These trees are watershed friendly and harbours endangered birds like Bannerman’s Turaco and some trees critically endangered in IUCN Redlist like Newtonia camerunensis.

CAMGEW from 2012 to 2020 planted 87000 bee loving trees in the Kilum-Ijim forest. She has developed 3 tree nurseries of 80.000 trees.CAMGEW has trained 1388 bee farmers in honey production, honey and its product quality control and bees wax extraction. She has also distributed above 1.354 beehives to trained bee farmers and organized them into 6 Oku White Honey cooperatives located around this forest. Women were allocated at least 30% and youths at least 30% of the positions to encourage them in apiculture and forest conservation. She created a CAMGEW-HONEYSHOP in Bamenda to convert bee farmers honey to money.The Honeyshop sales various honey, bees wax, candles, bee suits, bee smokers, honey wine, honey juice, bees wax soap and powder soap, body lotion, etc. 142 youths and women have been trained on entrepreneurship in honey value chain development; on transformation of bees wax to soap, powder soap, lotion and candle and also on transformation of honey to honey juice and honey wine production.

1580 women have been trained on business skills and 1325 women assisted financially through loans [US$ 5500 monthly]. This served as forest microfinance for women. 44 teenage boys and girls received vocational training to recycle plastics and clothing’s with African fabric to jewels, hand bags, belts, etc. 1076 women and girls received counseling and where necessary were supported financially through microfinance scheme. 78 teenage mothers received training on transformation of local food.

Bushfires reduced from above 7 in 2012 to zero in 2018 and 2019. In 2014, one bushfire destroyed about 1000 hectares of the forest.  In 2017, one bushfire occurred and more than 70 community members mainly bee farmers went to the forest to tackle and only less than 5 hectares were destroyed. No bee farmers want to see his/her beehive burnt so in solidarity they prevent bushfire and thereby protect forest because APICULTURE = JOBS = HONEY = MONEY = FOREST CONSERVATION. CAMGEW-Honeyshop becomes a CLIMATE SMARTSHOP because it is an opportunity cost to forgone bushfire that cause climate change. The market for honey must be available to engage communities to protect the forest.

CAMGEW planted 3700 trees of Newtonia camerunensis -a native tree of Kilum-Ijim forest known to grow only in Cameroon dry tropic at Bamenda Highlands and Bamboutous area. It is Critically Endangered as defined by IUCN Redlist. Kilum-Ijim forest is the largest remaining forest. Scientists say it has been difficult to nurse but CAMGEW succeeded to nurse 3700 seedlings. CAMGEW has also protected the Kilum-Ijim forest as the largest remaining habitat for Endangered Bannerman’s Turaco which is a red-feathered bird. Its feathers are used traditionally to crown notables.

Due to the irregular arrival of annual rainfall around Kilum-Ijim forest bees are confused. This affects honey production. In 2018, rains came early and trees developed vegetation instead of flowers as expected. There was 40% honey reduction. The period of honey harvesting could not be determined because as more farmers waited for flowers to be produced more vegetation was produced instead of flowers. Bee farmers who harvested earlier as ending April were better off though in tears than those who harvested at the end of April and in May which is the usual harvesting time. This has been occurring. Bee farmers need alternative actions to adapt to and/or mitigate climate change. Bee farmers have been trained agroforestry, organic coffee as alternatives.

CAMGEW believes that the future of our mother planet-earth is in the hands of men and women, young and old and also that this planet can be sustained by putting social and environmental justice at the centre of development.