In August 2017, the Japane Biosphere Reserves Network and AEON Environmental Foundation concluded a first-of-its-kind collaboration agreement in Japan. This agreement was concluded because AEON Environmental Foundation endorses the philosophy of UNESCO Biosphere Reserves to not only promote ecosystem conservation and protection, but also demonstrate a balanced relationship between people and nature. Both organizations are working together under this agreement in the following four areas in order to ensure abundant nature is passed down to future generations. 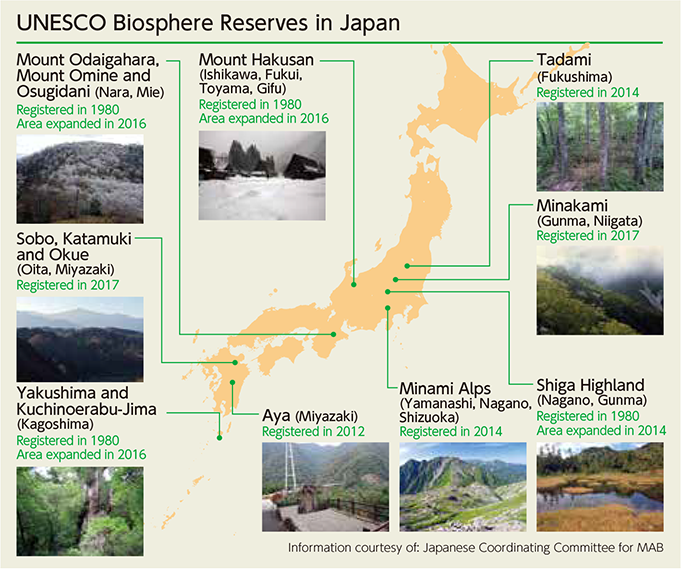 Biosphere Reserves※1is a project launched by UNESCO in 1976. This project is administered as part of the Man and the Biosphere (MAB)※2 plan implemented by UNESCO’s Natural Sciences Sector.
World natural heritage sites are intended to protect and conserve natural areas with considerable universal value, but Biosphere Reserves are intended to achieve harmony between ecosystem conservation and sustainable reuse, meaning focus is placed not only on protection and conservation, but also on a balanced relationship between people and nature.
Today, there are 669 registered Biosphere Reserves in 120 countries (as of June 2017), and 9 of these are located in Japan.

※1
In January 2010, the Japanese National Commission for UNESCO officially decided to change the name of Biosphere Reserves in Japan to UNESCO Eco Parks for ease of understanding.

※2
The MAB plan is an intergovernmental plan administered by UNESCO for scientific research on the sustainable use and protection of nature and natural resources in order to protect biodiversity.
http://www.mext.go.jp/unesco/005/1341691.htm