Topvalu fair trade products are FLO (Fairtrade Labelling Organizations International) certified, and contain ingredients produced by an producer cooperative that has also been certified by FLO.​ ​
FLO certified producer cooperatives receive income based on fair prices for their services as well as a premium used to improve the lives of those in the community. 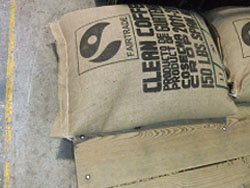 Aeon has established general compliance standards (AEON Supplier Code of Conduct) not only for the quality of Topvalu products, but also for the rights and safety of the workers and the environment. We request all contract manufacturers inside and outside the country to abide by the code and check to make sure that they do.​ ​​
For this reason, in fair trade, the purpose of which is to support ingredient producers, we believe it is necessary to ensure that the rights and safety of the workers are being protected at producer cooperatives in the same way.​ ​
When visiting the producers on this trip, a checklist was used to check AEON Supplier Code of Conduct requirements, confirm that FLO certification was maintained, and that premium payments were being used effectively.

The Republic of Guatemala, located to the east of Mexico in Latin America, is a country slightly larger than the size of Hokkaido and Shikoku combined. Their main industries are coffee, banana and sugar farming and textile production.​ ​
Fedecocagua (Federation of Agricultural Cooperative of Coffee Producers of Guatemala Ltd), established in 1969, is an alliance of nearly 150 small-scale Guatemalan coffee bean producing unions.​ ​
Producers (cooperatives) that have obtained food FLO certification use a farming style that cultivates a massive amount of a single crop (plantations). There are also many agricultural cooperatives consisting of groups of small-scale farmers, and it is this type that falls under Fedecocagua.​ ​
The headquarters are located in Guatemala City with branches all across the country where groups of small-scale farmers gather (member unions). The 55 branches form the overall federation.

In May 2012 we visited Guatemala by way of Houston, Texas in the United States, and participated in a conference. 110 representatives of the 55 branches participated in this conference. The conference covered many areas, such as income reports and budget approvals, solidifying regulations documents on matters such as child labor rules, abolition of forced labor, employment contracts, and explanations on the handling of pesticides.​ ​
Most reports and proposals were approved in a majority vote by a show of hands, and the conference ended with a pledge from the executives and representative director that these items would be upheld.

Topvalu products were also introduced at the conference. The item that garnered the most interest was our drip coffee. Drip type coffee is actually quite rare overseas.​ ​
Maybe it is a style unique to Japan?

110 representatives of producers from all across Guatemala gather together

Question and answer sessions on each item

Each item resolved with a majority vote. Those in favor raised their hands.

Next we headed to Palin, a town about one hour by car from Guatemala City. Here we visited Codepa, a member alliance of Fedecocagua.​ ​
Ninety percent of the 3,150 members of Codepa are from the Poqoman tribe, and in addition to Spanish, 65% of the tribe speak the Poqoman language.​ ​
Eight producers gathered in Palin so that they could be interviewed on farm operations using the following 10 items and to check paperwork and other records.​ ​
(1) Child labor (2) Forced labor (3) Health and safety (4) Freedom of association and the right to collective bargaining (democratic operation of the cooperative) (5) Disciplinary practices (6) Working hours (7) Wages and benefits (8) Environment (9) Certification, audits, management, updates (fair trade certification update) (10) Fair trade bonus (fair trade premium usage)​ ​
Many of the items were already established in and managed by the Codepa regulations. One issue, however, is that records are not kept for all items.​ ​
Persons who have completed a safety course are designated as health and safety advisors who provide guidance to other producers. 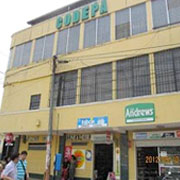 Fair trade premiums are used to provide free health checkups at independent clinics, access to pharmacies where medicine can be purchased at low cost, and banking services for members of the association.​ ​
On the other hand, it is common for children to help their parents at Guatemalan coffee farms across the country when not attending school, so concerns over child labor remain.​ ​
On this trip, we only visited and interviewed producers in two areas located close to the city, and were not able to go to any mountain communities.​ ​
We made it known at the Codepa conference that Japanese consumers are concerned about child labor, and the minimum hiring age must be upheld.

We arrived in Colombia after passing through Panama from Guatemala. The Cooperativa de Caficultores del Occidente de Antioquia (Antioquia Producers Cooperative), established in 1986, is a group consisting of 14 residential areas spreading across the western section of Antioquia. Each residential area has a coffee trading post where association members can offer their produce at a fair price, receive fertilizer, and receive instruction on how to use pesticides and coffee cultivation techniques.​ ​
We conducted the same checks as at Codepa in Guatemala.​ ​
First, we interviewed the CEO and general manager in charge of the Antioquia board of trustees and six other people, then checked paperwork and records.

The interviewees explained that they operate based on Colombian law, however their records and paperwork were somewhat lacking.​ ​
A shared chemical storage facility was used for pesticides, with a pesticide manager making rounds and explaining proper usage and dangers.​ ​
We noticed that the association runs operations with an eye on environmental impact, such as periodically testing the quality of waste water, etc.​ ​
Fair trade premiums are being used for facilities, equipment, growing saplings, environmental compliance and certification costs.​ ​
These items are determined at agricultural cooperative producer meetings attended by representatives elected by community advisors.

We visited the La Granja farm, a member of Ebejico located at an altitude of 1,300 meters and about one hour by car from the Antioquia headquarters.​ ​
With an average annual temperature of 30 degrees, shades made from banana leaves, etc. are used for cultivation purposes.

An advisor from Antioquia came and explained how to use safety equipment when handling pesticides, and how to spread pesticides properly.​ ​
Water quality is periodically tested at Antioquia to assess the impact on the environment.​ ​
The association also handles pulp removal and sun drying equipment repairs, showing that everyone works together to improve productivity. 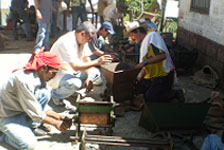 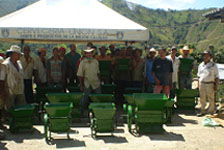 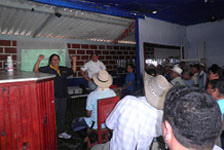 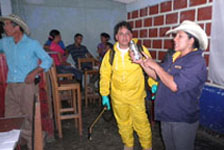 Pesticide training by staff from Antioquia

Tanzania is located on the east coast of the African continent. After achieving independence in 1961, the country's economy declined due to war with Rwanda and the effects of a drought, leading to one of the highest rates of poverty in the world at over 30%.​ ​
Although a route from Japan via Dubai or Doha will take you to Tanzania, we passed through Abu Dhabi and Nairobi on this trip. The Kagera Co-Operative Union (KCU) located on the western shore of Lake Victoria in Kagera province, close to the Rwandan border, comprises 125 unions with a collection of over 60,000 producers. The main initiative of the union entails providing support for organic cultivation. KCU is actually the first cooperative in Tanzania to export organic coffee. They aim to support the production of high-quality coffee and the lives of the producers to satisfy customers and further increase income.​ ​
We interviewed four managing members of KCU and checked documentation.​ ​
The Kagera producers cooperative has an established set of staff regulations with a minimum hiring age of 18, and legally-mandated age of 15 for temporary work.​ ​
Because women hold a lower place in Tanzanian society, the cooperative is working on training female leaders. Of the 125 unions, 15% of the leaders are female, and one of the seven chairpersons is female.​ ​
They also have their own environmental management policy with the goal of reducing the amount of pesticides and the goal of using organic farming methods. A KCU agricultural advisor provides instruction on the use and spread pesticides, however, they are almost never used anymore and the cooperative is close to adopting organic cultivation methods.

Use of fair trade premium payments are decided by majority vote among three union members (total of 375 people) at a conference. Even distribution of the payments is decided annually by either the shipment volume or the number of unions. This year it was distributed based on the number of unions. The remainder of the payment is distributed evenly to each union after subtracting fair trade training and training location repair fees, which each union gives back to the community.

Talking to producers near Kagera

Together with staff from Kagera, we visited Kagege, one of the 125 unions. Kagege consists of 250 people, and is run based on Kagera regulations. Injuries and sickness are taken care of by dividing the cost between the union and individuals and paying into the social insurance fund.​ ​
Many producers gathered together in line with our visit.​ ​
They are currently formulating their own environmental management policy with the goal of reducing the amount of pesticides and aiming for organic farming methods, similar to Kagera.​ ​
Fair trade is understood by all, and they knew that they would be audited in 2012 as well.​ ​
The fair trade premium payment for the current year is scheduled to be used for the installation of lightning rods at schools, health center operation and training costs.​ ​
In the past, premium payments have been used for the benefit of those in the community, such as free health checkups at the health center and repairs at Katoma Secondary School.

Kagera staff providing a lecture for the producers

In addition to communities with insufficient infrastructure, unstable governments, and poor safety, coffee bean producers are swayed by global market. The three unions we visited were small-scale operations formed by groups of producers, which in turn form even larger producer cooperatives.​ ​
Forming a large organization gives them a stronger competitive edge against outside sources, and establishes a framework for mutual aid. 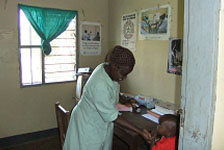